Peter Thiel is a controversial figure for a good reason. But he’s also brilliant, accomplished, and takes (for better and worse) unpopular public stances. His track record of success makes him worth listening to.

Zero To One: Notes on Startups, or How to Build the Future is a collection of his thoughts about Silicon Valley startups. It is very much attuned to that particular environment, but I recommend it if you work in software anywhere. It’s easily digestible even as an audiobook.

Thiel covers a fair amount of ground, but I’m going ignore most of it in favor of discussing the one idea that’s stuck with me: his framing of definite thinking versus indefinite thinking.

He argues that you can choose to think of the future in either definite or indefinite terms, and that choice has a real effect on how you approach and live your life:

You can expect the future to take a definite form or you can treat it as hazily uncertain. If you treat the future as something definite, it makes sense to understand it in advance and to work to shape it. But if you expect an indefinite future ruled by randomness, you’ll give up on trying to master it. … Process trumps substance: when people lack concrete plans to carry out, they use formal rules to assemble a portfolio of various options. … A definite view, by contrast, favors firm convictions.

Indefinite attitudes, he argues, explain much of what’s dysfunctional in today’s world. It’s a hyperbolic statement but worth thinking about. I certainly have a lot of (well-founded?) cynicism about our society’s ability to define, plan, and take on big challenges, which has only increased with COVID-19. This is most obvious at the federal level—it is tragic how little of federal stimulus money this year went to projects that actively and concretely tried to combat the actual threat that we faced. (Project Warp Speed, despite the controversy surrounding it, is a fortunate counterexample, along with the incredible acceleration of scientific research across the world.) 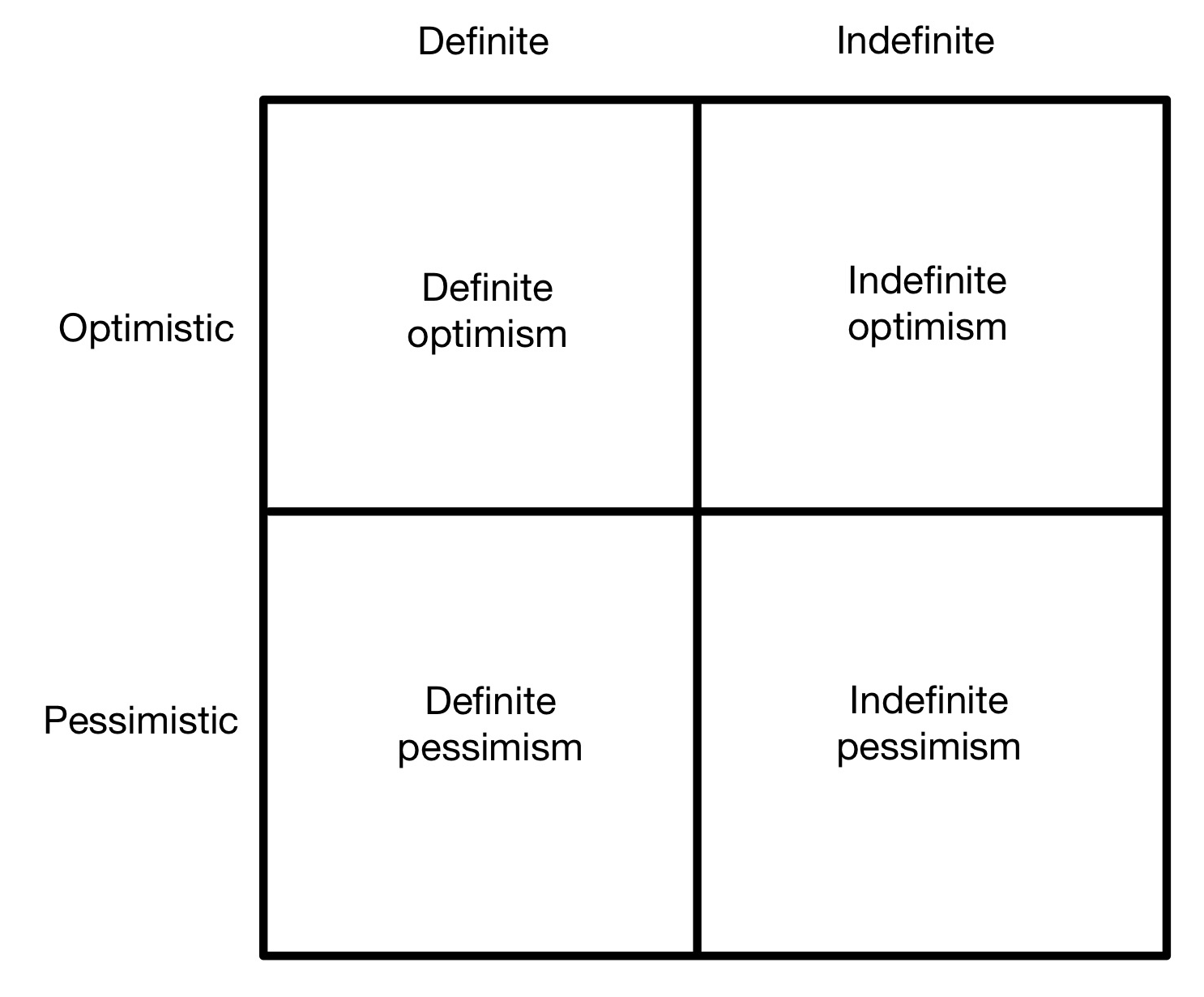 Let’s cover these in turn:

Thiel contends that the U.S. since 1982 (Reagan) has been defined by indefinite optimism, exemplified by the rise of finance as a driver of the economy. We believe in progress; we just don’t believe in planning for it:

Instead of working for years to build a new product, indefinite optimists rearrange already-invented ones. Bankers make money by rearranging the capital structures of already existing companies. Lawyers resolve disputes over old things or help other people structure their affairs. And private equity investors and management consultants don’t start new businesses; they squeeze extra efficiency from old ones with incessant procedural optimizations.

Definite vs. indefinite thinking is about agency. If you see the future only indefinitely, there is no reason to plan. It’s something that happens to you, not something you can create. Therefore, embracing definite optimism is the way to create a better future.

This brings to mind the famous Steve Jobs quote, “We’re here to put a dent in the universe. Otherwise why else even be here?” John Siracusa, in his remembrance of Steve Jobs, said this:

I was 9 years old at the time. … My grandfather also had a subscription to Macworld magazine, including multiple copies of issue #1, two of which I took home with me. I cut the Macintosh team picture out of one and left the other intact. (I still have both.)

I pored over that magazine for years, long after the technical and product information it contained was useless. It was the Macintosh team that fascinated me. That’s why I’d chosen to cut out this particular picture, not a photo of the hardware or software. After seeing the Macintosh and then reading this issue of Macworld, I had an important realization in my young life: people made this.

The Macintosh was the first thing in my life that I recognized as being wholly new. Everything I’d seen thus far in my nine years had seemed like it already existed prior to my birth—perhaps like it had always existed. But here was something different, something amazing, and this magazine explained how it had been created by this small group of people.

The implications bloomed in my mind. We aren’t stuck with the things we have now. We can make new things, better things. And it doesn’t take many people to do it. The team that had created this mind-bending new machine were all up on my wall, their individual faces clearly recognizable.

That is: those with a definite vision for the future are the ones who can actually build the future. Thiel argues that in contrast, the common belief in modern software practice in incrementalism—that the best way forward is small, iterative, adjacent steps—diminishes potential:

Even in engineering-driven Silicon Valley, the buzzwords of the moment call for building a “lean startup” that can “adapt” and “evolve” to an ever-changing environment. Would-be entrepreneurs are told that nothing can be known in advance: we’re supposed to listen to what customers say they want, make nothing more than a “minimum viable product,” and iterate our way to success.

But leanness is a methodology, not a goal. Making small changes to things that already exist might lead you to a local maximum, but it won’t help you find the global maximum. You could build the best version of an app that lets people order toilet paper from their iPhone. But iteration without a bold plan won’t take you from 0 to 1. A company is the strangest place of all for an indefinite optimist: why should you expect your own business to succeed without a plan to make it happen?

In other words, for a company to be great, it needs to create for itself a concrete vision for the future that is different and better in some fundamental way from the present. This sounds grandiose, but it is an excellent way to encapsulate the goal of building and delivering a unique and superior product to your customers. It is creating a future that other people have not yet imagined.

Thiel’s discussion made me realize that I can tend toward indefinite thinking. By nature, I am suspicious of the Big Plan and gravitate towards refining already existing processes and products. This, perhaps uncoincidentally, is the same trap that I see many Agile practitioners fall into. Sprints lead people towards a two-week planning horizon. Which is a feature! But I have found that if I’m not careful, this approach’s clear tactical advantages and comfort can lead to myopia and discourage me from committing to a concrete and big-picture strategy. Long-term planning is not just for waterfall development.

It’s easy for cynicism about the world and our ability to change it to prevent us from making big concrete plans for the future, or worse, from imagining a future that is better in some big, tangible way from the present. It can cause us to turn our focus inward toward relative status games or internal company politics instead of outwards toward the wider world and what we’re trying to build. It’s this diminishment of the imagination that I think is a real tragedy and something I am now trying to guard against in my own thinking.

Thiel issues the challenge to think bigger, be a definite optimist, and be determined to shape the future to your vision, even if in a small way, make a plan, and do the work. Even if the universe is too big for most of us to make a dent in it, this approach has to be better than capitulating to indefinite cynicism about the future.